A stranger walks into the bar

Good evening everyone. To those I've known before, happy to see you again, and to those I've yet to know, a pleasure to meet you.

I guess since I'm essentially starting from scratch here, so something of an introduction wouldn't be out of the question. I'm Luke, I'm 30 years old (it was my birthday just a couple of weeks ago), and I live in Britainland. I came here from Fourplay, so the people from there may remember me. I'd been feeling like I need that community vibe again so despite its inactivity I have been trawling that desolate wasteland for a couple months, before finally hearing from George about this place. It would be nice to feel part of a community again, however active it may be. I'd heard about this place before from various 4P members but I never investigated further until now.

Admittedly I've not been super into Pokémon in years, but I loved it as a kid. I used to own Yellow and had 100%'d it before losing the cartridge somewhere, which had essentially put me off from investing more time into it in future. While my tastes have moved on a bit since then, I'm still a huge gamer, and I still hold a love for the Pokémon of old. I'm such a old boi that I don't even know the majority of the ones from Gen 2 onwards. My sister bought me the DVD boxset of the Indigo League part of the anime and I've been having fun rewatching that and getting my dosage of nostalgia. I gave Pokémon GO a try when it first came out, but due to the lack of support in its early stages it got boring really fast. I understand that it's been given a lot more love lately, but that reputation will be hard for me to shake. At least for a little while more. Team Instinct ftw tho.

Other games I like to play are a real mixed bag. Depends on my mood. World of Warcraft, League of Legends, Path of Exile, Hearthstone, occasionally some Rimworld. Been trying to get through Wolfenstein The New Order lately as well. My Steam backlog is like a mile long so I've been trying to force myself to spend more time each week on clearing it out, little by little. My other hobbies include reading and writing, with fantasy being my favourite genre. I also do a bit of Dungeons and Dragons as DM, though we're currently on hiatus over the holiday period. Looking forward to starting our shenanigans back up again come the New Year.

Anyway that's about it for now, I can't promise how long I'll stick around for, but I hope that it'll be for quite some time. I look forward to reconnecting with people I lost contact with (I regret neglecting communicating with them), but also maybe that I find some new friends here. I hope you're all having a Merry Christmas.

hi luke merry christmas and welcome!! it's been a while I hope you've been well =)

you're always welcome here of course so i'm glad you could find us, i hope you feel cozy here and enjoy your stay.
There's a lot of beauty in ordinary things.

Also hi Luke! Hopefully you find good things here. I thought I'd make you a speedrunners guide to Marriland to help you settle in. I do look after you guys you know... 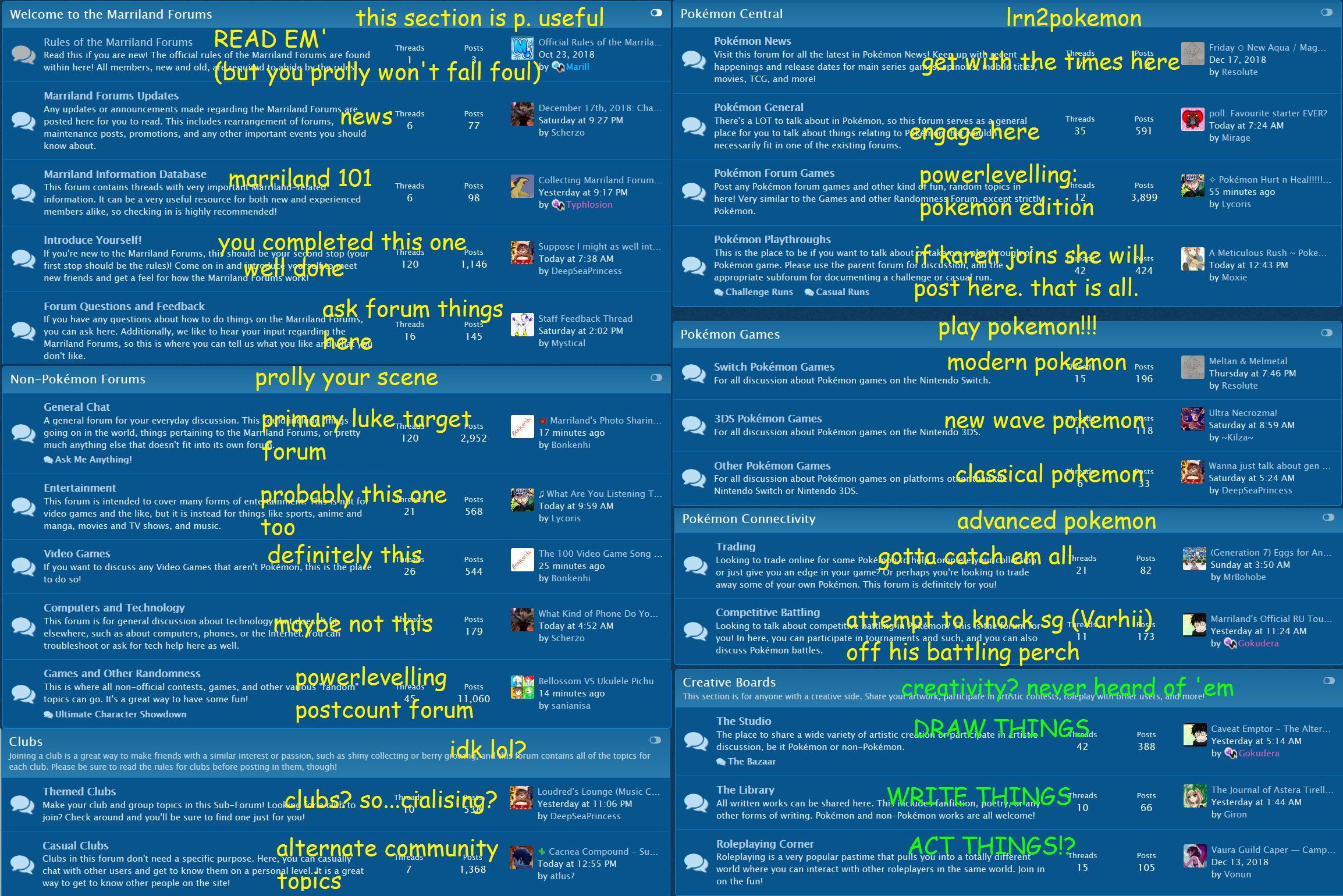 welcome to marriland, luke! i hope you'll have a good time here! and merry christmas too!!

Hey there, Luke! It's pretty awesome seeing you here and stuffs. I do hope you enjoy your time here and hope you have been doing well. ^^
♡
​

Hey Luke! Welcome to Marriland! I definitely get what you say about "needing a community". It wasn't that long ago that I wasn't a part of any community, but then I ended up coming onto (what was then) Azurilland and slowly but surely became a part of the great community that exists here! Hopefully you'll enjoy it here!
"Whenever there is a meeting, a parting is sure to follow.
However, that parting need not last forever...
Whether a parting be forever or merely for a short time... That is up to you."
- Happy Mask Salesman, The Legend of Zelda: Majora's Mask

Thanks for the warm welcome everyone. And thanks for the very excellent guide George. Have you ever considered writing guides more often? The Comic Sans was a nice touch. ;)

Nice to see you again Katey and Kaity! I've been mostly okay really, with a few bumps. It's a work in progress, this life thing.

Truth be told, I think I had a bit of a mini breakdown a couple months ago and it kinda compelled me to seek out people again. I'm more stable now, but nevertheless, I feel like joining this place is the right move for me. :)

Hi Luke!!! We never really talked on 4P but I remember you man! Glad to see you again tho (: If you're looking for a close community to join and hang with, this is definitely a good place. If you have a Discord you can also check out our server (there's a link in the navbar above!) cuz it's pretty active and is a great way to get to know people too.

Thanks Chris, I remember you and it's good to see you again too! And I shall definitely do that, I use Discord all the time.

Greetings
It doesn't matter where we go, there's
always someone that doesn't agree with us.

Been neat seeing you around on Discord, Luke! Welcome to our little forum community

theDINOsaurus said:
Been neat seeing you around on Discord, Luke! Welcome to our little forum community

Greatly enjoying my time here, this is exactly what I needed, I feel. :)

Plus, it's always great to see people I used to talk with again, and getting to know new people.

"Well forgive me for not leaping for joy. Bad back, you know."
----
This way for questions!
---
Board of Play! || Marriland Rimworld!​
You must log in or register to reply here.
Top