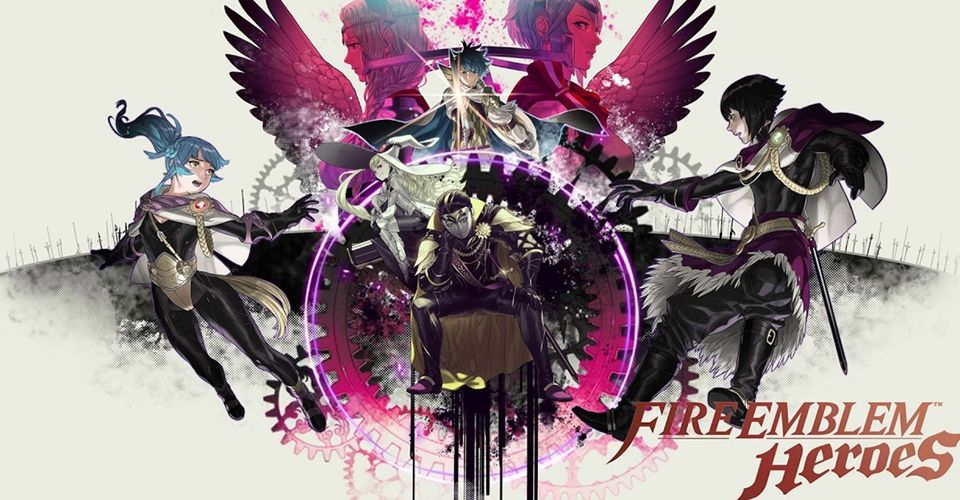 I think I should stop posting about FEH in Isa's Discord channel, so...

So, new banner with Legendary Azura. As if the previous Young Azura wasn't enough. Jeez. And now we're getting New Years Nifl and Muspel units. I really want New Year's Fjorm and Laevatein, but considering I don't even have normal Laevatein... my chances are pretty low. I haven't even got a duplicate normal Fjorm to start merging with my free one.

Anyway, merging's gonna change in the new year, so +1 merger removes a unit's bane - and subsquently buffs low BST units (since high BST units don't have much of a problem). This will affect ALL merged units, including current ones, and change a number of their stats around. This should help with a few of my 4* mergers, and my 5* units... that I need more of to merge. Unfortunately, I doubt I'll ever get a 5* merger for my Nowi (my very first 5* unit), so I don't see how viable she's gonna be anymore. Hero Feathers are slightly annoying to get.

Legendary Azura's prf works really well with her base attack tactic and granting an extra space for movement is really nifty. Her banner has been pretty good to me giving me L!Azura, L!Hector, and L!Marth within 60 orbs. Probably best to save it with all the events coming up.

Burned maybe 150 orbs for Legendary Azura. (Acquired two Camillas and Fjorm first, of course.) Planned to not pull initially. Reconsidered after seeing skills. Could not resist something that good. Helps Tactics teams immensely too.

Feels down on the game lately. Wants to be interested in a hero before seeing their stats. Recalls the last two being Summer Micaiah (somewhat, in August) and Bow Hinoka (in April). Fared very poorly on favorites.

Which heroes did others vote on for Choose Your Legend 2? Picked Soren, Beruka, and Nah. Did 2018 treat you better?
Last edited: Jan 2, 2019

I can't remember with Choose Your Legends 2 - it feels so long ago.

I ended up getting regular Micaiah the banner AFTER Summer Micaiah (which was kinda weird), but my latest 5* was Helbendi. Still no luck on L!Azura or N!Fjorm and N!Laevatein. (Speaking of Fjorm, I still have the free one from Book 2. Which is now already at Level 40 and has 9999 SP. Without mergers. Goes to show how much I use Fjorm, lol)

The owl is cute af, not gonna lie.

I play this game on and off, tbh, I'll play for a little while when I get into it and then lose interest again. I feel like part of my struggle is it feels kinda grindy? I have all these heroes I want to 5*, but not nearly enough feathers to do it, haha.

Good to know book 3 is out though, I should probably work on that some time.
my head gets so confused, hard to obey

So... just over 11 hours later, I managed to get New Years Fjorm. Sure, she's +Spd/-Atk, but with the new mergers, I think I can deal with that. If I get another N!Fjorm, that is. Who knows? I need to get more orbs for the Legendary Banner and try and get some merging on my own Fjorm. Also to get Pale Flower Nino, which is one I really want to get.

Enjoys Aether Raids because of defense. Always felt good to receive Arena defense wins. Provides much more information and control than Arena. Finds more pleasure in fiddling with team and layout than most other in-game pursuits.

Would be entertaining to stick into Aether Raids. Add a Water Blessing alongside Fjorm, Azura, and Eirika. Chuckles at Gunnthra's statline: 60 hitpoints / 56 attack / 47 speed / 31 defense / 30 resistance. Still requires +4 attack and Axebreaker (assuming otherwise default skills, no Sacred Seal, and an uncharged special) to one-round a neutral +0 Surtr. Dislikes Surtr so much.

Laguz Royals abound! Tibarn, Leanne, Reyson and Nailah are coming along with Chapter 3 of Book 3 - featuring a map with Hel herself! Spooky!

The only problem I have is that Reyson and Leanne have weapons, when Herons don't fight. Then again, this is Heroes, they'll need to actually fight to be useful.

Dislikes the level of powercreep on these skills. Expected some, given the new book. Went above and beyond with Sturdy Impact. (Presumes it to be inheritable, of course.)

Plans to pull all reds and blues on circles with the free summon and tickets. Will not go beyond that, however, barring a high pity rate. Acknowledges how good Tibarn and Nailah are (or their skills, at least). Predicts more ridiculous units ahead. May look less shiny in two months.

One positive: Feels more hopeful for Nah. Increases their odds of appearing alongside Panne and Yarne. Plays well with dragon allies. Creates another potential team type. Requires decent and easily merged beasts, however.

Also enjoying the story of Forging Bonds - Tibarn helping Alfonse with learning to rule, Nailah noticing different things about Askr, Reyson running into Amelia (I think, he doesn't say, other than the girl was a twig inside their heavy armour), and Leanne doing some studying and talking more. Pretty interesting. (Like talking with Narcian. And Owain. Bad influences, those two)

Impressive luck on those Reysons. Spent 24 orbs on the banner. Received Ninian on the free summon.

Said nine days...in their time. When is that in real time? Expects paralogues for the next two banners. Resumes the story in late February. Assumes Spring characters and Binding Blade in March. Might tick down to one day by April.

Never particularly liked (or disliked) Alfonse anyways. Feels indifferent towards this development, consequently.
Unlocked all Forging Bonds conversations. Considers these the best yet. Benefitted from playing off the Askr Trio (and more), rather than the Summoner.

Reached Tier 19 in Aether Raids. Doubts any further progress. Bought the sixth defense slot. Only really wanted that. Won five of sixteen defenses this week, also (barring any matches in the next six hours).

Well this is just FAAAAAAAAAAAAAANTASTIC. Camilla's up to her 6th alt. I think that's now the most alts...

Describes this banner as depressing. Liked Hinoka, Sakura, and Elise in Fates. Expected worse in the fanservice department (of the four shown up close). Feels zero urge to try for any. May not want future alternate costumes, even of favorites. Already waited a long time too. Kills longer term appeal.

Prefers more serious art and circumstances. Points to the Fallen Heroes banner as excellent alternates. Considered last year's Valentine's Day costumes as good too. Hopes for a repeat there.

Expected Nah to fall far back with vote merges. Fared alright, using Choose Your Legend Round 2 results. Fell behind Jill, Shinon, Ilyana, and Shadow Dragon/Mystery Anna in rank for characters not yet in-game. Still feels pessimistic about Nah's odds.

Who do you expect to win this year?

Female guesses:
1st: Loki. Stayed relevant to the story. Never got an alternate version either.
2nd: Micaiah. Performed well between both rounds. Comes at a time with lots of alternates for competitors. Helps significantly. Could be Micaiah's year to Thani.
3rd: Thar'ja. Lost tons of ground last year. Received no new alternative costumes recently, however.
4th: Eir. Never saw the appeal of Heroes characters. Made a splash last year, though. Probably favors characters not available. Shrugs. Bets on one new Heroes face, if nothing else.
5th: Camilla. Cannot stop it.
Honorable mention: Nino. Not as popular as past rounds, most likely. Ought to reach top 10 females still.

Male guesses:
1st: Marth. Lost without the merge last year. Foresees people wishing to correct that. Benefits from Smash too.
2nd: Alm. No alternate characters. Showed promise last year. Suffers from Echoes not being as new.
3rd: Chrom. Took a hit last year, like many Awakening characters. Predicts a boost from Smash.
4th: Leif. Describes them like Alm, but with fewer fans of the game.
5th: Bruno. A dark horse pick. (Rides one too.) May absorb many of Veronica's voters.
Honorable mentions:
- Ranulf. Just ran a Radiant Dawn banner without them. Who knows when the next chance will be? Stands to gain a lot of votes.
- Corrin (male). Smash.
Last edited: Jan 24, 2019

I've been voting for Micaiah since she comes home, including that one L!Tiki banner where she came home 3 times. I also voted Marisa since she was my favorite character in Sacred Stones.

My prediction for the winners will be Marth because his votes will not be split and Chrom. Smash is really popular and should boost both greatly. On the female side, I think Robin wins that because Smash and then Micaiah given how sparse Radiant Dawn banners are and the fact that she only has one alt.

Feels bad for Anna. Suffers from not being fully merged still.

Definitely sees that Smash boost. Forgot about the Robins. Expected only one gender to benefit (the default display). Appears to not be the case.

Approves of Soren's placement. Lost to the Black Knight in Round 1. Finished just behind Tibarn and Ranulf in Round 2.

7 Camilla Alts, if this is to be believed and stay that way.

Cannot decide between feeling jealous of Camilla voters and feeling sad. Loves Camilla enough to vote, regardless of the number of versions. Probably cares for nobody else, though (or only heroes with lots of alternates too).

Looked back at converting poll results into actual characters. Recorded who was not summonable as of February 5, 2018. Underlined everyone who made it since then.

Totals 25. Missed only beasts in the top 20. Became inconsistent after that.

Added 54 new characters in that timespan. Includes five not voted on (due to not being in the story yet).
You must log in or register to reply here.
Top