Currently I am working on a Fakemon region based on Oregon. To make it feel more authentic, I'm making sprites of the Fakemon as I create them. I'm still new to the world of pixel art, but I hope to show progress along the way. Feel free to provide feedback and constructive criticism!

If I’m short on ideas, I’ll also work on sprites for official Pokémon.

It's so cool you're making your own region! That's a great start to pixel art, it's a really nice design. I'm not very experienced in pixel art, but I would suggest practicing curving some lines so they seem more organic, adding in shading/highlights and using references for parts you're unfamiliar with, like the claws. 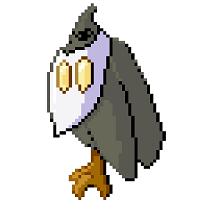 Thanks to Franciscosta for the spriting advice!
Last edited: Nov 18, 2018

Oh hey, someone else with their own region! I'll be keeping an eye on this, keep up the good work!

Those two Fakemon look really cool! I especially like how you explained the stats on this last one, it adds a lot of depth! I actually liked the first sprite you made, so much that I made an image detailing some small changes you could do to improve it, but if you're just doing drawings that's fine too!

The second one is actually the same Pokémon. I redid the design. After seeing the guide though, I think I’ll stick with the original design. Thanks so much for the help!

I did the final evolution first because I find it easier to work backwards than forwards when it comes to designing Fakemon.

Here's a Cosmog! This was great practice for curves.

With Toropez, I would try and find a way to texture his skin a bit better. As it is right now, it looks flat and doesn't really have a lot of detail.

Could I suggest making GSC styled sprites before you make more modern ones? Working with a more limited palette can really help you get down shading and detail.

i would really second what resolute said, but I'm making this post to kind of elaborate what i think:
You have the basics down and theres a lot of potential, but right now the sprites look kind of awkward, and incomplete even, lacking a lot of either detail, shading, or other features, and a lot of times, lacking all 3. The Cosmog one is really the only one thats not lacking in other features (i.e. it would look finished if drawn out) and it looks kind of complete, but it still lacks a lot of shading and detail. All your other ones look incomplete, just because they lack a lot of extra features, they look more like colored in skeletons that anything. Also shading is a really big problem, and so is not fully outlining your pictures. See: Cosmog and the first sage grouse Pokemon, (by first i mean first in the evolution line), its especially bad on the sage grouse where i cant till where the sprite stops and the background begins. I would at least recommend using transparent backgrounds to kind of alleviate that problem.
Im sorry if these seems overly critical, I really am trying to be supportive, bottom line is that your just new to this and your always going to have a lot to learn if your new to something. And at least i can still tell whats there, which is better than a lot of Fakemon sprite work I've seen. So good job, keep at it, and you'll get better in no time! :)

edit: if you don't understand what i mean by "extra features", i mean take Cosmog for example. Look at how much different parts it has, from the cascading colors to the face to the cheeks to the golden ring, now look at most of yours, which have (at best) a main body, some eyes, maybe a leg, and a secondary color, and at worst, are just a body with eyes and a horn of the same color thrown in there. Basically, just add MORE to the actual designs of the Fakemon.

edit 2: i don't want to take your sprites and edit them myself since that seems kind of... idk, but if you'd like me too to show you what I mean more visually, (which I am much better at showing than telling) I could.

@Ape711 Shading is a large problem I have and I agree I should make the backgrounds transparent. I deleted the fish one as it’s an admittedly underwhelming design.

I’ll try and experiment with GSC styled sprites rather than RSE ones. That should be a lot more manageable.

As for the first stage Sage Grouse, the idea is that it's feathers cover it's claws. I'll try to better indicate that in future sprites. The fully evolved one is supposed to have a face mask that resembles the tuft of it's real life counterpart.
Last edited: Nov 27, 2018

Yeah that would be fine.

Essays l AMA l Photography Portfolio​
You must log in or register to reply here.
Top