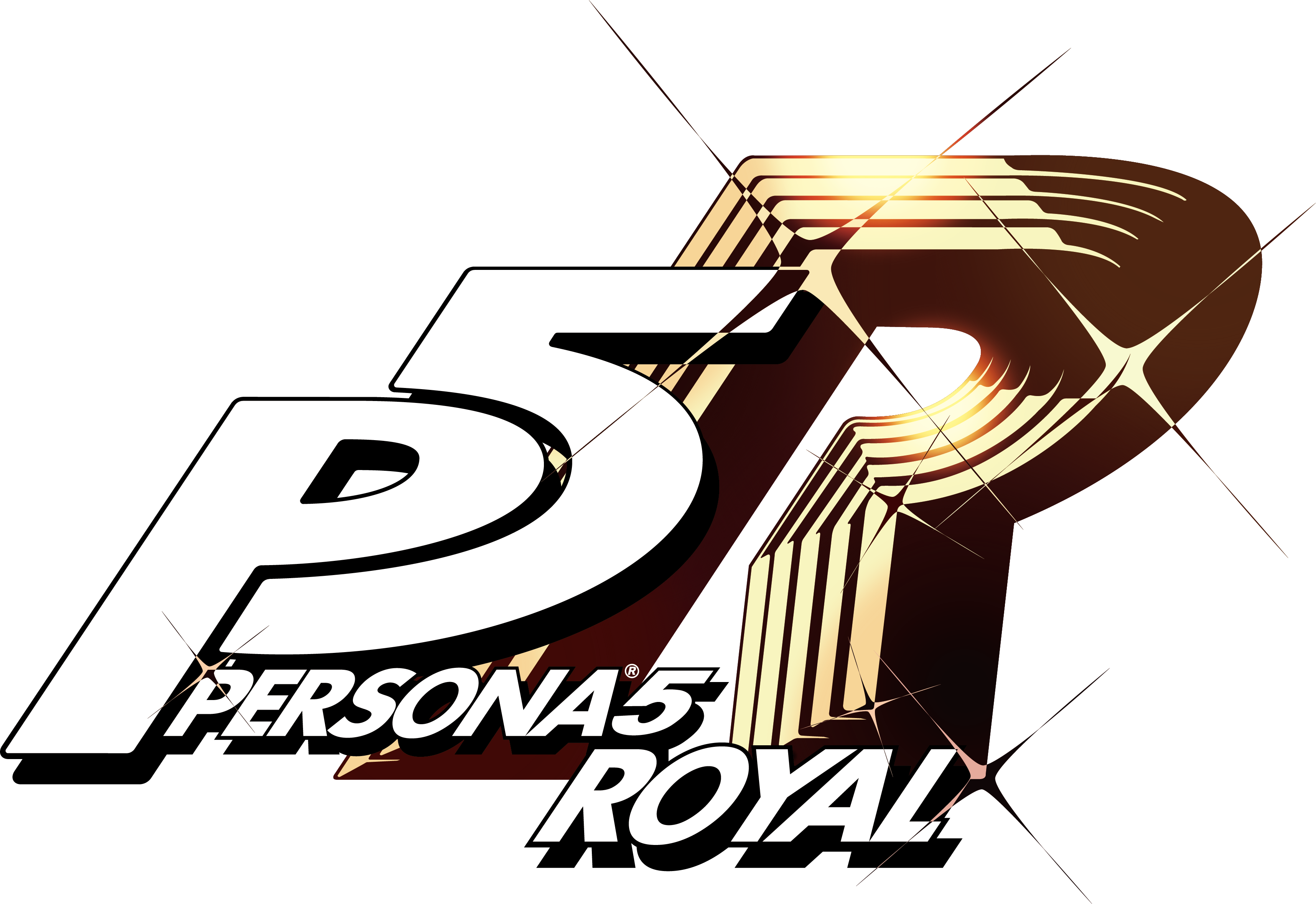 Here, we can discuss all things Persona 5 and Persona 5: Royal. 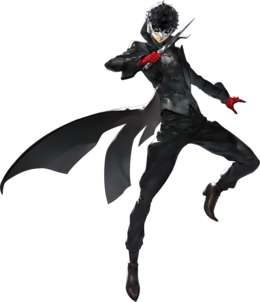 Referred to as Akira Kurusu in the Persona 5 manga & Ren Amamiya in the anime, the Protagonist of P5 can be named anything you want. The Protagonist is sent to Tokyo to attend Shujin Academy in his second-year on probation for a crime. He becomes the leader of the Phantom Thieves of Hearts.

Like others affiliated with the Fool Arcana, the Protagonist holds the Wild Card, allowing him to summon multiple Personas. His weapons are knives and handguns.

He is voiced by Xander Mobus. 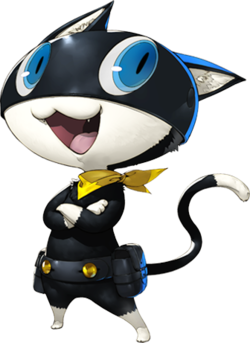 Despite having a girl's name, Morgana is in fact male, and despises being referred to as just a "cat", despite predominately looking like one. He can shapeshift into an anthropomorphic form, as well as into a van, which unfortunately has no air conditioning. His weapons are curved swords and slingshots.

He is voiced by Cassandra Lee Morris. 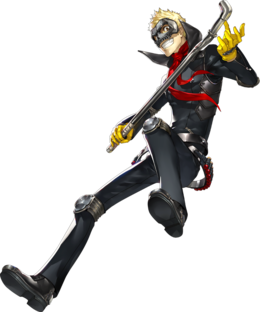 Second-year Ryuji is, in essence, a troublemaker, or a "problem student" as Shujin Academy puts it. From an abusive household, Ryuji got an incredible opportunity for his future to become a star athlete. However, complications ensued, and not only did Ryuji injure his leg, he was also made a school outcast. He is incredibly short-tempered. His weapons are bludgeons and shotguns.

He is voiced by Max Mittelman. 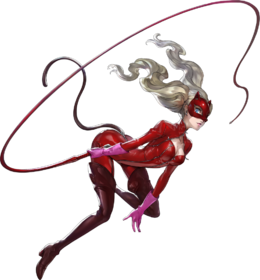 Being 1/4 American, her foreign blood and living abroad before the start of the game hasn't given second-year Ann many friends, aside from Shiho. She is rather restrained in her daily life, but becomes headstrong and fierce when someone hurts her friends. Her weapons are whips and submachine guns.

She is voiced by Erika Harlacher 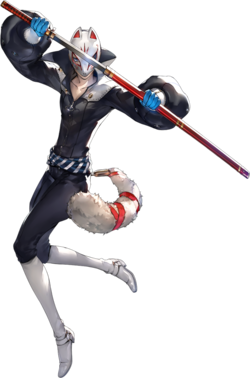 Yusuke is an honour student in an art course at Kosei High School. He is very calm, collected, methodical and elegant, not to mention intelligent. Despite this, he is incredibly sheltered. His weapons are katanas and assault rifles.

He is voiced by Matthew Mercer. 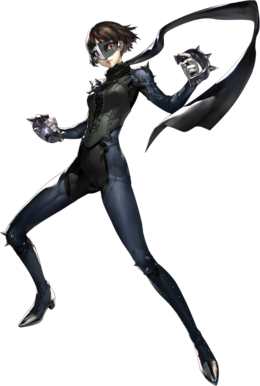 The younger sister of the prosecutor Sae Nijima, third-year honour student and student council president Makoto is a perfectionist with a strong sense of responsibility. Despite her immensely serious and mature nature, she is frightened of horror and ghost stories. Her weapons are Tekko and revolvers.

She is voiced by Cherami Leigh. 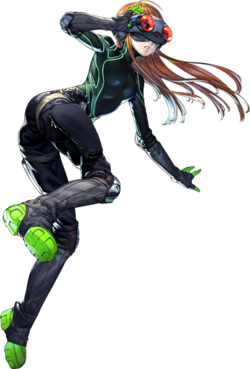 Futaba is a genius at computing, programming and hacking. However, she has terrible social anxiety bordering on mild agoraphobia, leading her to be afraid to go outside. Since graduating middle school, she has not attended school ever, though at her age, she would be a first-year. As the teams eventual main Navigator, Futaba has no weapons.

She is voiced by Erica Lindbeck. 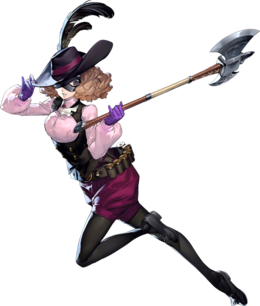 While having good communication skills, third-year Haru has lived a very sheltered life, and is thus naive to the actual ways of the world. Even though she grew up with the all the elegance and splendour money could buy, it cost her freedom and happiness. She has also been arranged by her father to marry a person who she hates due to his angry and controlling nature. Her weapons are axes and grenade launchers.

She is voiced by Xanthe Huynh

"You should know me by now. Did you think this would please me, being shown mercy? I don't want your pity. Are you really this spineless?"
Goro Akechi
Code Name: Crow
Arcana: Justice
Initial Persona: Robin Hood
True Persona: Loki
3rd Tier Persona: ???

Called "The Next Detective Prince" by the media, Goro Akechi has garnered attention for his stance against the Phantom Thieves. However, the Thieves find out he knows much more about the Metaverse than at first glance. He wields laser sabers and ray guns.

He is voiced by Robbie Daymond. 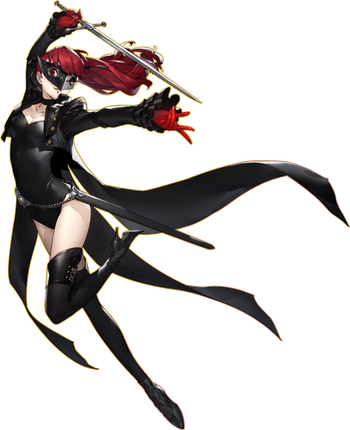 A first-year student who transferred to Shujin at the same time as the Protagonist, Kasumi Yoshizawa is a rhythmic gymnast with high promise, having received a scholarship from the Academy and a rather perfect life. Like with Goro Akechi, she is at odds with the Phantom Thieves' goals, believing that people should solve their own problems. Becoming involved in the story in the third semester of Persona 5: Royal, she ends up becoming a Phantom Thief. She wields rapiers and lever action pistols. 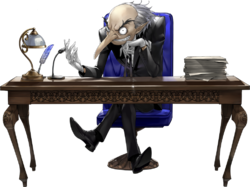 Unlike in previous games, Igor here acts sort of like a "warden", due to the new design for the Velvet Room looking like a prison. He is still the proprietor of the Velvet Room.

He is voiced by David Lodge. 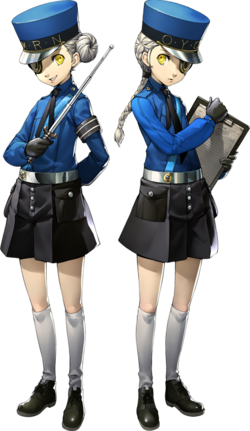 "It's like you forget where you are, Inmate. You've got some real guts though! With that spirit, you should have no trouble making progress!"
"If you have the will to continue your penal labor, we can grant you greater freedom within this prison."
Caroline and Justine
Confidant: Strength

The new assistants for Igor, they are dressed like prison guards and act as the Protagonist's correctional officers. Caroline is rather ill-tempered, and hopes for the Phantom Thieves arrest. Justine, on the other hand, still treats the Protagonist like a prisoner, but is calm, and soft-spoken.

Like with Elizabeth, Theodore and Margaret before them, they assist the Protagonist in fusing Personas.

They are both voiced by Carrie Keranen.

"Thanks for taking my counselling into consideration."
Takuto Maruki
Confidant: Consultant (Similar to Magician)

A new Confidant to Persona 5: Royal, Takuto Maruki arrives at Shujin Academy after Kamoshida's change of heart as is employed as a Counsellor.

He is voiced by Billy Kametz. 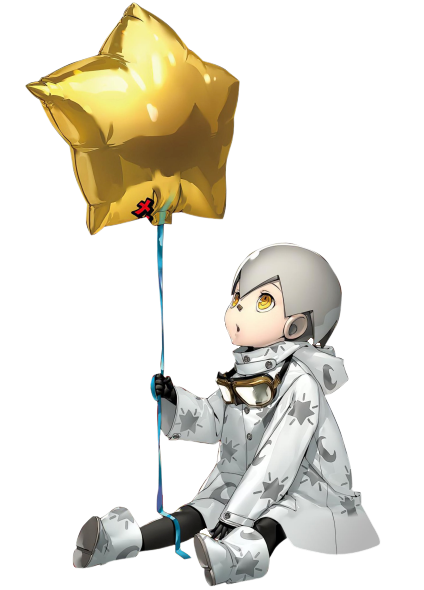 A new character in Persona 5: Royal, Jose is a mysterious young robot-like character who helps the Phantom Thieves in Mementos. Flowers and star stamps are collectable in Mementos, and the player can trade these items with José: flowers are traded with items, and star stamps let him improve rewards such as experience, money, and items in Mementos. He may also occasionally upgrade one of your accessories to unlock its true potential. 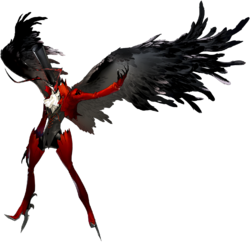 "What's the matter...? Are you simply going to watch? Are you forsaking him to save yourself? Death awaits him if you do nothing. Was your previous decision a mistake then? Very well, I have heeded your resolve. Vow to me. I am thou, thou art I... Thou who art willing to perform sacrilegious acts for thine own justice! Call upon my name, and release thy rage! Show the strength of thy will to ascertain all on thine own, though thou be chained to Hell itself!"
Arsene

Arsene is the Protagonist's Initial Persona. It is based off of the fictional thief, Arsene Lupin, created by French writer Maurice Leblanc. It specialises in Curse and Physical skills. 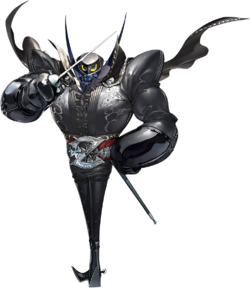 Zorro is Morgana's Initial Persona. It is based off of the fictional masked outlaw of the same name, created by American writer Johnston McCulley. It specialises in Wind and Healing skills. 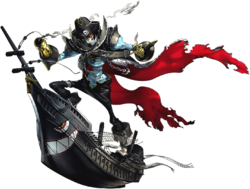 "You made me wait quite a while. You seek power, correct? Then let us form a pact. Since your name has been disgraced already, why not hoist the flag and wreak havoc...? The "other you" who exists within desires it thus... I am thou, thou art I... There is no turning back... The skull of rebellion is your flag henceforth!"
Captain Kidd

Captain Kidd is Ryuji's Initial Persona. It is based off of the privateer William Kidd. It specialises in Electric and Physical skills. 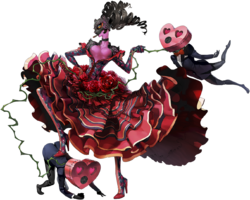 "My... It's taken far too long. Tell me... Who is going to avenge her if you don't? Forgiving him was never the option... Such is the scream of the other you that dwells within... I am thou, thou art I... We can finally forge a contract... There you go... Nothing can be solved by restraining yourself. Understand? Then I'll gladly lend you my strength."
Carmen

Carmen is Ann's Initial Persona. It is based off the fictional gypsy in George Bizet's opera Carmen, originally created by French short story writer Prosper Mérimée. It specialises in Fire, Healing and Support skills. 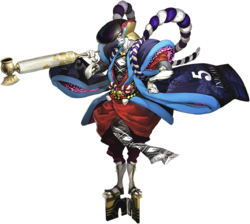 "Have you finally come to your senses? How foolishly you averted your eyes from the truth. A deplorable imitation indeed... Best you part from that aspect of yourself! Let us now forge a contract... I am thou, thou art I... The world is filled with both beauty and vice... It is time you teach people which is which!"
Goemon

Goemon is Yusuke's Initial Persona. It is based off of the semi-legendary Japanese outlaw Goemon Ishikawa. It specialises in Physical and Ice skills. 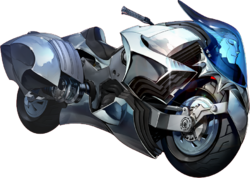 "Have you decided to tread the path of strife...? Very well. Let us proceed with our contract at once. I am thou, thou art I... You have finally found your own justice... Please... Never lose sight of it again. This memorable day marks your graduation from your false self..."
Johanna

Johanna is Makoto's Initial Persona. It is based off of the legend of Pope Joan, a female Medieval Pope. It specialises in Nuclear and Healing skills. 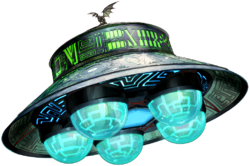 "Contract...I am thou, thou art I...The forbidden wisdom has been revealed. No mysteries...no illusions shall deceive you any longer."
Necronomicon

Necronomicon is Futaba's Initial Persona. It is based off of the legendary fictional Grimoire, originally created by American horror writer H.P. Lovecraft. As a navigator Persona, it gains skills that aid in battle and ambushing Shadows. 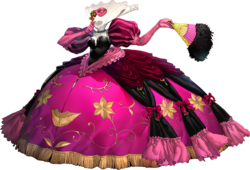 "I see you finally made up your mind...my dear, fated princess. Freedom for you must stem from betrayal. If you still yearn for it now...then you must not err. Now, tell me...who shall you betray? Yes, that gaze...! I can finally display my true strength. I am thou, thou art I...Let us adorn your departure into freedom with a beautiful betrayal."
Milady

Milady is Haru's Initial Persona. It is based off of the fictional character Milady de Winter, the villain of Alexandre Dumas' Three Musketeers. It specialises in Psychokinesis and Gun skills.

Robin Hood is Goro's Initial Persona. It is based off the titular character in English folklore. It specialises in Bless, Curse, and Almighty skills.

Super hyped for this! Persona 5 is my second favorite game ever and getting more content just makes it better. I hope Kasumi gets her own confidant because she looks like a really fun character.

Essays l AMA l Photography Portfolio​
You must log in or register to reply here.
Top