DPPt Share Your Sinnoh Teams! What Pokemon did you use to beat Cynthia?


Hi everyone and welcome to my thread that is all about sharing your Sinnoh Teams with other members of Marriland forums!

One of my favorite things about Pokemon is how many different possibilities there are when you are playing through a Pokemon game and building a team. One of the first things I posted when I joined these forums was a thread where you guys could share your Kalos teams and I really enjoyed reading all of your responses. I love reading about other people's unique teams and I also like sharing my own. It's also fun to see how different (or similar) other people's teams are compared to mine. That is why I decided to make another similar thread, this time all about the Sinnoh teams from Pokemon Diamond, Pearl and Platinum.

So feel free to share the teams you used in Pokemon Diamond, Pearl and/or Platinum!
You can share you first ever Sinnoh team or if you had multiple Sinnoh playthroughs then you can share your most memorable team or even both!
It would also be cool if you shared some memorable moments you experienced during your Sinnoh playthroughs.
Maybe you even discovered some new favorites after you used them on your Sinnoh team for the first time?

So technically my first and only Sinnoh playthrough happened earlier this year on Pokemon Pearl. I tried to play the Sinnoh games multiple times in the past but they were to slow and sluggish for my taste so I would always quit before I even reached the 5th gym. This time however I had to complete my Pokemon Pearl because I had some Pokemon stuck on my Sapphire version that I wanted to transfer up to my Ultra Sun game.

I don't know if I'm more patient now compared to when I was a kid but I actually had a lot of fun during this playthrough of Pokemon Pearl.
While the games still feel a bit slow and even sluggish at times, it wasn't nearly as bad as I remembered it to be and now I have more appreciation for Sinnoh than I originally did. Now let me finally tell you about the team I used during this playthrough.

My Pokemon Pearl team was: Caesar the Infernape, Valkyrie the Staraptor, Neptune the Floatzel, Amara the Mismagius, Shazam the Raichu and Toph the Steelix.

Some memorable moments that happened were:​
- randomly finding a shiny Wingull on Route 220 shortly after I obtained Surf HM​
- my Raichu taking down 4 of Bertha's Pokemon with Grass Knot after she let me set up a Nasty Plot for free​
- beating Cynthia with an underleveled team and without using Revives, the team was in the mid to high 40s (46-48)​
- switching between Staraptor and Steelix until I lowered Garchomp's attack to -4 and then beating it with a few Ice Fangs from Steelix​

Pokemon Diamond was the first time I actually put effort into training a team of six, rather than just using my starter and maybe one other Pokemon.

These games came out right around the time I entered middle school, which over 10 years ago now so my memory is a bit foggy. However, I'm pretty sure my team looked something like this.

As you can tell, a lot of early game Pokemon + Lucario because you get a free Riolu from doing the Iron Island sidequest.

I don't remember a whole lot about this team, except for the fact that Empoleon was the first Pokemon I ever raised to lv. 100. I think Pokemon Diamond was also the game I put the most hours into, somewhere between 200 and 300 which is a lot for me. I'm usually the type of person who stops playing after defeating the Champion.

One thing I also remember is that the very first Starly I ever caught was holding a Yache berry, which is only a 5%!! I had no idea how berries worked at that time so I think I just put it in my bag and never looked at it again. xD

My Platinum team was very similar because I'm unoriginal and liked a lot of the early game Pokemon. This is what the team looked like after defeating Cynthia.

My first playthrough of a Pokemon game was Platinum. I grinded so hard to beat Cynthia, finally able to with:

Most recent playthrough, I think it was about a year ago. 5 of the 6 were great, you'll never guess who the outlier is

When I played through Pearl, I beat Cynthia with the following team:
Empoleon

I'll give you one guess as to the only Pokemon I was really using.

When I did my Platinum playthrough for AzuriPlays, I beat Cynthia with: 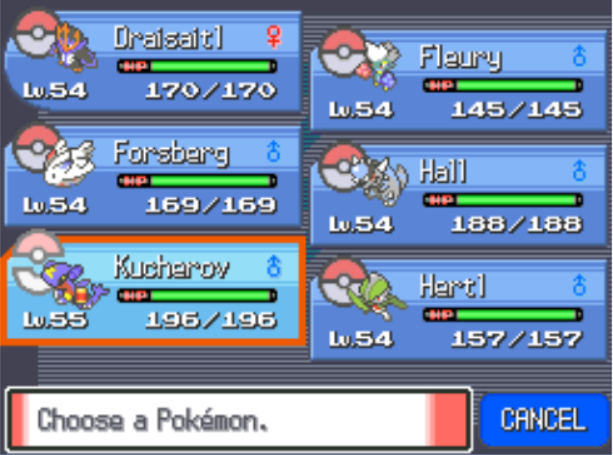 Cynical Toast said:
Most recent playthrough, I think it was about a year ago. 5 of the 6 were great, you'll never guess who the outlier is

Without looking up Gen 4 learnsets of these Pokemon I will guess that the weakest link was either Luxray or Altaria? I know a lot of people use Luxray because of it's design but most of them also say that using Shinx line in Sinnoh is an uphill battle. If it isn't Luxray then it has to be Altaria since it was arguably the weakest dragon until it got a mega in Gen 6.


~Kilza~ said:
When I played through Pearl, I beat Cynthia with the following team:
Empoleon

I'll give you one guess as to the only Pokemon I was really using.
Click to expand...

I guess it's safe to assume that Pearl was your first, maybe second Pokemon game you ever played. Most of us used only our starters for the first couple of playthroughs. :)

That Platinum team of yours is awesome, I also wanted to use Rampardos since it's one of my favorite fossils but sadly it wasn't available in Pearl.
"… …"

The very first time I beat the Pokemon League on Diamond, I still hadn't assembled the final team I wanted to use; I had a Kricketune or Lopunny, can't remember which, in place of the last Pokemon below. But these are the Pokemon I use nowadays and did most of the postgame with: unoriginal, perhaps, but I still enjoyed using them. They're all in the upper seventies by now.

most epic gamer since ever

My team for my first playthrough of Pearl was a Empoleon, a Togekiss, a Gallade, a Weavile (random memory of my Weavile OHKO-ing cynthia's garchomp) a Garchomp, and a Roserade.

My first ever Pokemon game was Diamond, but I cant really remember the team I used for that very well except for Torterra and Staraptor.
The teams I do remember, however:

Platinum was the first Pokemon game I beat and my team was:

I also have some memories like Azumarill basically being a slave (3 HMs) and Jolteon having only STAB moves (thus I needing Exp. Share to train it against Cynthia).

Partially corrupted the save data around the seventh or eighth gym. (Blamed GTS for it at the time.) Displayed the blue screen upon load-up. Retained progress by always saving twice.

to the party around then. Wanted to complete the game. Deemed it wise to not waste too much time. Managed to do so. Never played much after that. Meant either starting over or risking more severe corruption.

Was really happy with Luxray

Pokémon Pearl was my entry into the world of Pokémon, and the game means a lot to me. It introduced me to my favourite franchise, and to RPGs as well. I put in at least 300 hours into it, not regretting anything. My.Coroner was my favourite location, as I was anboying to get to it. When I beat Roark (the first gym leader) I was so excited I did not even care that I had to attend a birthday party! It was mine :p
I fondly remember my team, here I produce to you my first Pokémon team ever:

As you can see, it isn't a very professional team, but the younger me did not think so. After Infernape (the first time I beat Cynthia, Infernape was Lv.86 - I'll explain later), Crobat was the strongest member (Lv.82).

Now the reason why my entire team was above of.75 (with only Roselia,and Floatzel being below Lv.80) I because I thought victory road was a cave that would open up behind the waterfall only after I'd have impressed the judges (I imagined there were invisible judges). I didn't even interact with the waterfall. By the time I found out the actual victory road, my team was already level 70 dye to grinding with Level 40-45 wild pokémon. It was a tedious procedure, taking a long time for my team to come to those levels. And when I'd found out the actual victory road, I had an entire PC box filled with Lv.50 + Pokémon.
My DS broke a year after finishing beating Cynthia, along with my R4DS. I cried only for one hour. And until 2016, I spent time without a console, and then received a new 3DS XL. If you've read this, well, thanks to hear a random guy on the internet blabber nostalgia!
My games:

Credit to Haychel for the avatar!​

Palkia was kinda filler because I could never really decide on my sixth slot. Some good memories with this team included using Staraptor for Candice because of Close Combat and destroying Lucian with three Pokémon having Crunch.
♪ I spy overlying wings swing as I go / Dive right into the free air and rouse the sun ♪

Just like a bunch of others, this is from a long ass time ago. The only one I’m not certain was Bidoof, as I don’t remember if I actually brought my HM Slave with me or not. I might’ve thrown him in to get revives or healing on my other team members though.

My first game was Diamond. Infernape was super cool and the only good Fire type, Staraptor was obligatory Route 1 bird but the fact it learned Close Combat was cool. Luxray was there because I also caught him early game. Gastrodon was there because I was eventually learning more about type diversity and Gastrodon seemed like a good choice. I think instead of raising a Shellos I caught an actual Gastrodon from the route before Sunnyshore. Dialga was the of course Pokémon because cool legendary Dragon type. I didn’t actually use it much because it came at level 47 which was just a little too underleveled for my liking compared to the rest of my team.

I think you can tell that the basis for being on my team was “did it look cool?”
"Cyrus is my name. Remember it..."

So I have never finished gen 4, but I am doing a playthrough with my friend in America which this being her first game.

Her team is
Empoleon
Luxray
Heracross
Garchomp
Gardevoir
Roserade (shiny, this was a random encounter for her whilst she was training and I said she should use it instead of the non-shiny Roselia she had)
You must log in or register to reply here.
Top