Since this is Regine's thing we can be very descriptive. Here is a form used in one of Jaye's roleplays + possible superpower. We can edit as necessary.


Name: Your character's full name. This must include at least first name and last name, but could be broadened by a middle name.

Nickname/(Superhero or Supervillain) alias: Does your character have a nickname that he or she goes by?

Gender: Male or Female? (Or any other)

Sexuality: What is your character's sexuality?

Birthday: (not necessary but an interesting extra detail to add)

Appearance: (this is where art comes in but de can also describe with words)

Fears and Dislikes: Post at least three of your character's fears or dislikes. This can be a simple aversion, such as a dislike of small talk to extreme phobias such as water or such. Maybe your character has a fear of water that will spice up their interactions in the roleplay. These fears can be used to make the plot more exciting.
(This stuff is not a necessity but cool to have)

Home Town: Where was your character born and where do they currently reside?

Brief Bio: This will give a full picture of what made your character into the person he or she is today. The 'Brief Bio' should include early childhood, important events, and growth into the person they are today. (And why they became a superhero/villain

Relationships: (not a necessity but cool to have)

Other: Anything else that may be important for the rest of us to know. You can be creative here!
-Name:
-Superhero/Supervillain Alias
-Superpower/Suoerability
-Gender/Species (in case we want to do something non-human
-Age
-Appearance
-Personality+brief bio
-Relationships (like an archenemy?)
-Other (for any other random stuff)
Last edited: Jun 25, 2019
• Friendship/Recognition List • Extended Signature

Get your thinking caps on! It's time to create your own hero or villain! A few ground rules:

Hero/Villain Name: The name that most people know them as when they’re on duty.
Real Name: Optional. It’s up to your judgment whether your character’s real name should be known.
Gender: Male? Female? Non-binary? Genderless???
Age: How old is your character?

Appearance: Give us an ORIGINAL FULL-BODY, FULL-COLOR ARTWORK of your hero or villain accompanied by a description of their appearance. Use complete sentences for the description. Give at least a paragraph.

Personality: Talk about your character's personality, such as how people see them, average reactions, interesting quirks, etc. Give at least a paragraph, but it’s recommended to be longer.

Brief Bio: How did your hero or villain come to be the way they are now? Tell us about the important events in their life so far. Give at least a paragraph, but it’s recommended to be longer.

Weapon(s): Optional. Use your judgment.
Power(s): What power(s) does your hero/villain have? If you’re using multiple powers, make sure they tie together somehow.

Other: Anything else that may be important for the rest of us to know. You can be creative here!

Today at 2:57 AM
He could have thick skin that's hard to break.
Moxie

Today at 2:57 AM
I don't think we have patterned tape here tho
Dino

Today at 2:57 AM
he can also have strong claws

Today at 2:57 AM
wait
Gokudera

Today at 2:57 AM
you know what would be adorable?
Be really tiny and frail
but have big dreams
Moxie

Today at 2:57 AM
are going to killm
Dino

Today at 2:57 AM
They are strong: Harlequin shrimp, from the Pacific and Indian oceans, use their flat, oversize claws to sever arms from sea stars for food.
Moxie

Today at 2:57 AM
my creativity
Gokudera

Today at 2:58 AM
Snapping shrimp make louder sounds than any other marine animals, producing a noise with their claws that is greater than a gunshot or jet engine.

Today at 2:58 AM
omg that'd actually be a pretty interesting design
Gokudera

Today at 2:58 AM
let's straight up make a Fakemon
Dino

Today at 2:58 AM
They dance: To attract fish, cleaning shrimp wave their white antennae and do a little dance. Several shrimp species, known as cleaners, safely venture inside the open mouths of fishes to remove bloodsucking parasites.
yes i have been reading shrimp facts
Gokudera

Today at 2:59 AM
OH! make the little hairs on their heads balloon animal balloons.

Today at 2:59 AM
Water Steel or Water Dragon
Dino

Today at 2:59 AM
ok so what will the shrimp's power actually be
he's got super strong claws
is that it
Gokudera

Today at 2:59 AM
Strong claws and durability.

Today at 2:59 AM
Stunning them with the snaps that are hella strong
Dino

Today at 3:00 AM
and then, while they're incapacitated, pincer them
Dino

Today at 3:00 AM
kind of like sound moves in pokemon

Today at 3:00 AM
the sound waves from the snap incapacitate, then go in for kill
or, go in for the krill
Dino

Today at 3:00 AM
that's his catchphrase
I'm going for the krill
Ok here's a form I filled out based on our Discord discussion at the beginning of the day. Feel free to create your own or make any suggestions/edits to the Shrimp Man I threw together! This is by no means final.

Appearance: Shrimp Man is a typical middle-aged dude who looks like a total dad. Brown hair, a beard (he thinks it makes him look manly), and an aura that oozes unwarranted over-confidence define his appearance. His uniform was designed with the spotted pattern of the harlequin shrimp in mind as well as your stereotypical superhero (tights, the mask - you get the picture). Although he looks mostly human, he's got large shrimp claws, a durable shell, and antennae to really sell the "shrimp" half of Shrimp Man (well, he also couldn't get rid of them now if he wanted to. He doesn't though. He loves being Shrimp Man.) But perhaps the most iconic part of Shrimp Man's appearance is his characteristic Dad Smirk™ that tells his daughters and his enemies alike that he's about to say or do something stupid.

Personality: Krillin is an awkward, overly-confident middle aged man and a total dad. A bumbling do-gooder, he preaches about the sanctity of the ocean to everyone he meets in hopes of inspiring change. He embarrasses his two daughters with dad jokes on a regular basis, with eye rolls being a normal response anytime he opens his mouth. Still, he has a good heart and a sense of justice, even if he is a bit clumsy at putting them to use. A master of puns, his catchphrase as Shrimp Man is “I’m going in for the krill,” which is probably more likely to invoke groans than fear but it makes him feel cool. Krillin states that his primary inspirations for his Shrimp Man-persona include Batman, Nightwing, and Damian Wayne. When in uniform, he does his best to keep a straight face (yes, even when cracking puns) and speak in a deep voice, though it turns into a grumbly sound that resembles the voice of a hoarse whale. This makes it difficult for the public to take him seriously, but his work speaks for itself, and once again it makes him feel cool. Don’t ask him to stop. It’s futile.

Brief Bio: Shrimp Man was once a normal shrimp like you and me. Wait, no, actually he was a man. Krillin Krillmonger was the son of a surly fisherman and a mystery woman who claimed she was a mermaid. So, basically, just an ordinary guy. The sea was his first love, but he found himself working a stifling office job after graduating with his degree in marine biology. Dissatisfied, he planned a month long vacation to the Great Barrier Reef, where he met the (second) love of his life scuba diving, settled down, and started a family. Two kids and twenty years later, he learned a horrifying truth: the coral reefs were dying at the hands of a dastardly villain by the name of Pipeline, whose sewage powers pollute oceans and destroy aquatic ecosystems (his catchphrase: “Coral Reefs? More like Coral REEKS!!!”). Unable to stand such appalling acts, Krillin told his wife to get out her sewing machine and put together a haphazard uniform that made his two daughters groan.

Unfortunately, Reef Man was still just a normal man in everything but name (and one with back pain at that, mind you). He rushed into battle against Pipeline, whose sewer-water spewing blasters shot him into next week (and left him in major need of a shower – his wife made him sleep on the couch for 3 days). It was after this harrowing loss that he had a moment of revelation. A translucent, incorporeal shrimp spirit descended on his dreams. Introducing herself as the spirit of the reef, the shrimp commended him for his fighting spirit and said that she would bless him with her powers so long as he promised to use his powers only for the good of the oceans. She warned that possessing these powers may not be easy, and that he would have to sacrifice the life he knew in return. Without hesitation, he wholeheartedly accepted the great responsibility he had been offered. He woke up in the morning with antennae on his head and large, powerful claws.

Krillin now sleeps on the couch indefinitely (his wife still loves him, but his hard, durable shell doesn’t make for good cuddling and she'd rather not lose an arm if he squirms in his sleep), but he gained the power he yearned for – the power to be the voice of the voiceless reefs and to fight back against Pipeline. And so, he puts that power to good use daily, opposing those who would harm ocean ecosystems. Sure, he’ll never go to another parent-teacher conference again, but is that really a loss? I didn’t think so.

Power(s): Krillin received his powers from a shrimp spirit that watches over the reefs. As such, his powers are all based on the amazing abilities of a shrimp (I’m sure that comes as a shock. I’ll give you a moment to compose yourself.) His signature heroic feature is the two huge claws that replaced his hands. Like those of the harlequin shrimp, they are strong enough to rip limbs from his enemies. But that’s not the only feature these incredible claws have, oh no. He also inherited the snapping shrimp’s impressive ability to create a sound louder than a jet engine with his claws, amplified even greater in proportion with the increased size to match his human body. These sounds are loud enough to rupture an eardrum (which requires at least 165 decibels, a level that can be reached by a gunshot at close range) and will daze his enemies at the very least. While his opponent is stunned, Shrimp Man rushes in to put the strength of those giant claws to work. As he loves to shout, he is truly going in for the krill.

Shrimp Man’s antennae work like a shrimp’s as well, allowing him to track down Pipeline and other villainous polluters by “tasting” the chemicals in a body of water. He has gills while also retaining his human lungs, allowing him to breathe both in and out of the ocean. Finally, his thick, durable shell provides him defense against attackers, though he remains vulnerable to Pipeline’s chemical attacks to some extent.

it's been ages since i've drawn a human. hope this is fine though, i did base him off christy's description.

Here's the full body, apologizes to taking so long as I was busy all day. Will add shading and edit this post.

Edit: whoomp here it is! 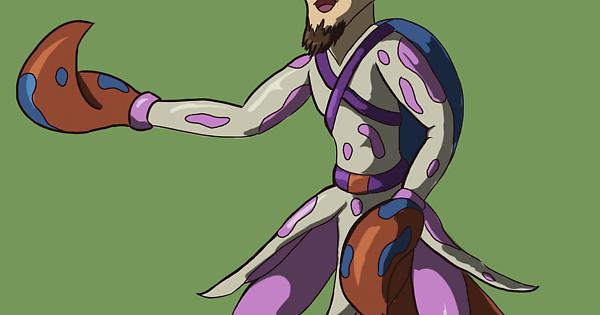