@Moonwatcher: Seems like you could use some more type variety, so I'll give you Girafarig

Moonwatcher said:
Thanks for the pokemon everyone :3
Ok so I've got:

Can I be evil and also give you Milotic

Sly Penguin said:
Can I be evil and also give you Milotic

Since this is the remake yes you can!
And with that I have everything! :D

Ok, time to try something different. I'll be doing a regular Nuzlocke of Pokemon Y this time. (And most likely remember to make a proper log of it unlike the last few :P)
So once again I need 10 pokemon; 6 for the main team and 4 reserves.
Only limits are no trade evolutions and no male-only pokemon. (Mothim, Gallade, Sawk, Throh, any others I've forgotten)

I'll give you a starter in Delphox!

I had honestly forgot that Dragalge and Klefki were Kalos pokemon... I don't know why, but in my mind they were Alolan natives. Dragalge isn't even in Sun/Ultra Sun...

Ok, so Dragalge, Diggersby, Gogoat, Delphox and Klefki. Can honestly say I've never used any of these pokemon before, so this is shaping up to be fun already. :D Thanks to everyone so far.
Just five more pokemon needed before I can start. :3

Little more type variety here. It's not directly Kalos native but what say you to Scrafty?

do? If so, feel free to pick the color for this one.

Anyway, now that the main part of From Light Fang to Alola has been ended, I kinda feel like doing a scramble for its Episode RR. Instead of maintaining the string sextet theme, I'd like this particular squad to be composed by two groups of three: Koh's squad and Elio's squad.

Please pick three Pokemon out of these six who made it to the String Hexalocke Hall of Fame (regardless of their instruments during the whole playthrough) : 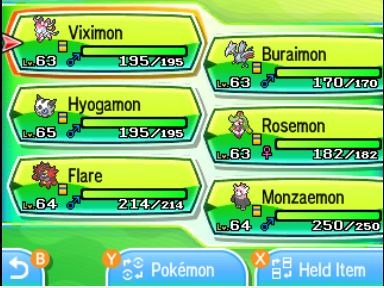 Please note that these choices are nonrepeatable for Elio's squad even after all three slots here are full.
Please pick three of any other Pokemon available in either Moon or Ultra Sun because that's all I have among gen 7 games. Here are things to keep in mind while suggesting a Pokemon or two:
In case any of you don't get it, here's my no-no list among non-legendaries and non-mythicals:

I'll have you continue using that Skarmory!

@Moonwatcher - Since you still need more Pokemon, I'll give you Lapras

@SAF - You can continue to use Tsareena

Typhlosion said:
I'll have you continue using that Skarmory!
Click to expand...

~Kilza~ said:
@SAF - You can continue to use Tsareena

@Moonwatcher How about Yanmega

@SAF Will give you Wailord

for an Elio slot.

Deva said:
@SAF Will give you Wailord

as one of Elio's Pokemon.

Awright. An alternative to

I'm posting the final part of my Alpha Sapphire Nuzlocke Scramble in a couple of hours, which means it is time to start recruiting a team for the 4th installment of the series!

I will be moving onto Sinnoh and playing through Pokemon Platinum! Just like always, I'm combining the Scramble with a slight variation of the Nuzlocke rules, meaning that if one of my Pokemon faints, I can no longer use it for the remainder of the game. This does up the difficulty quite a bit, so I will be accepting a couple of reserves to use as back ups.

Do not suggest any Pokemon that are not available within Pokemon Platinum. Trade evolutions are totally fine because I have two DS systems and multiple gen 4 games.
Click to expand...

Remember that this is a more difficult version of a Scramble AND Pokemon Platinum isn't an easy game. I'm not asking you to give me only S tier Pokemon, but try to be mindful of what other people have already given so I don't end up with a team full of common weaknesses/lack of offensive presence/etc...
Click to expand...

I will be accepting 10 Pokemon in total, six for the main team (including my starter) and four reserves.

For the main team, I would like to have at least THREE Pokemon by the third gym and a FULL TEAM by the 5th gym. Reserves can be Pokemon found at any point of the game, even late game.