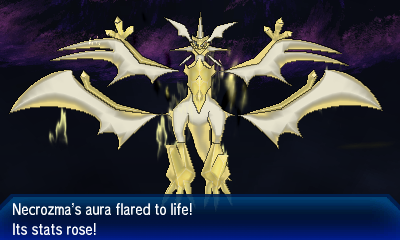 ​
As the beast that appears at the climax of Ultra Sun and Ultra Moon, taking Nebby from Lillie and fusing it to become this gigantic, four winged, Psychic/Dragon-type that gains the Totem Aura, and has all its stats boosted. At Level 60, with four dangerous moves in Dragon Pulse for Dragon-type STAB, Smart Strike and Power Gem for two of its particular weaknesses (and certain other types), and its signature Psychic-type Photon Geyser, a very powerful move that says screw you to your Pokémon's abilities, a built-in Expert Belt for its ability, and astonishing 97/167/97/167/97/129 base stats BEFORE the aura, this thing had many players puzzled when they first fought it. Especially to anyone doing a Nuzlocke of these games, who many had their run suddenly cut short, and to those coming up to it requires them to seriously strategize. And it comes with perhaps the most astounding battle theme in the franchise, for that. And after you beat Gladion at Mount Lanakila, you can even use it yourself, and it has its own signature Z-Move, Light That Burns The Sky, with an animation that must be seen to be believed.

How did you beat this thing? Cheap strategies? Luck? And have you messed around with it yourself? Discuss!

I just abused how Zoroark works. I had one in my part, so why not?

I think I did it on the 2nd try, using my Araquanid (and a Revive or two) after Alolan Ninetales set up Aurora Veil. Lunge was a godsend against it.

I've consistently beaten it through luck, mostly because of the Affection bonuses. Lots of Pokemon toughing it out so I won't feel sad.

Entered with the team (Talonflame, Pan'goro, Ampharos, Crobat, Tsareena, and Primarina) around level 50. One-shot everyone. Provided no good grinding location.

Gave the Focus Band (not Sash) to Crobat. Reset until Toxic connected. (Might have gotten Haze off too.) Stalled from there.

Cheesed it with the Focus Sash and Toxic. Another Pokémon had the Focus Band on (and it activated!), so I only had three or four faint instead of five.
♪ I spy overlying wings swing as I go / Dive right into the free air and rouse the sun ♪

In one fight I cheesed it with an affection survival, ZMove, and then Sandstorm chip damage. For my second fight, I went Roto-Boost tank crazy with Clefable and then Moonblasted it to death. Neither was exactly elegant or in the more competitive style I was going for, but hey, it's not a fair fight to begin with, so I guess it wasn't too bad.
“The important thing is not how long you live... It's what you accomplish with your life.
While I live, I want to shine. I want to prove that I exist. If I could do something really important... That would definitely carry on into the future.”
-Grovyle (PMD EoS)

Bones Barlow said:
I've consistently beaten it through luck, mostly because of the Affection bonuses. Lots of Pokemon toughing it out so I won't feel sad.
Click to expand...

^This plus a ton of revives was my strategy. If my strongest Pokemon didn't hold on, I just revived them and then tried again, hahah. Eventually I got through it, but it was rough.

Did it first try using only a Scrafty. It survived the second hit after I used an X Sp. Defense and healed it before using a Z-move.

I'd love to say I did it first try on my Heliolisk solo but Necrozma got a crit (lisk always survived on some sliver of health) and I was using X Defense over X Sp. Defense because I thought Photon Geyser worked like Psyshock. Oops.

I paralyzed it with Ampharos’ thunder wave and used every powerful attack in my disposal.

Use Zoroark with Illusion of any Pokemon that is NOT weak to dragon or rock type and isn't a dark-type. That way the thing only knows how to use Photon Geyser at every turn (because it's apparently the best move). Photon Geyser is a psychic move, so it does absolutely nothing on Zoroark.

I had a lot of fun setting up Nasty Plot for 3 turns (looking like a Zeraora) and tearing it to shreds with a single Snarl. Never saw the HP bar go down faster than defeating Route 1 Pokemon with a Lv100 team.

Easiest battle against a legendary ever.
Last edited: Nov 5, 2018

Yeah, I didn't have a Zoroark and went in blind. 0_o

Ended up using a Rotom Power on my Mudsdale and spamming heals to run it out of Photon Geyser. From there, I was able to alternate healing and High Horsepowering until it died.

My middle brother spoiled me a bit about the Ultra Necrozma battle right before I entered the fight. Though, he misinformed me that Ultra Necrozma was gonna have +2 in all stats when really, it just had +1 in all stats. Going into the battle thinking that the legendary would be at +2 in everything, I used my Metagross with a Roto Boost, and OHKO'd the mon with a crit Meteor Mash.

Shamelessly rushing through the game so I could get to the battle tree & to get move tutors, my adventure team was pretty poor. Fortunately I had maxed all of their affections to the point at least one of my party members survived the presumable OHKO move, and then retaliated with a super effective z-move. In the absence of using a z move or a good steel type, I imagine this fight would/has spawned a myriad of rage quits. Its up there with Cynthia's Garchomp and Ghetsis' Hydreigon for sure.

Can we take just a moment to appreciate how cool the ultra form looks? Phenomenal.

Salazzle with toxic+focus sash. Then I just kept healing her while toxic does its magic.
♡
​

Game Freak did a hell of a job trying to make a super difficult battle, even if it can be beaten through gimmicks.

It was difficult for me too; I think Ultra Necrozma took out a good half of my team before I was able to take it down. x.x

First time I played through US I was completely unprepared and had to refight the thing about five times because I wasn't expecting to cover for its serious weaknesses like that.

The first time I battled it, I did not realize anything about its power because I literally "shotted" it in one hit using the signature Z-Move of my Decidueye.

On the other hand, definitely yes during other playthroughs; its Special Attacks are particularly strong and if you don't have a Steel Type or a Toxic user in your team, the battle definitely gets harder than usual.

I beat it more easily with a Z Move, but I also didn't use that move until a few Pokemon had fainted, so I saw the difficulty...

I had a Golisopod that could just barely survive all the attacks Ultra Necrozma threw at it. I would use First Impression, then my Emergency Exit would be triggered and I'd send out something else. Every other Pokemon on my team got OHKO'd, so I would use a turn to sack them while healing Golisopod, then send it out again to repeat the cycle. First Impression was a 4HKO, so I only lost three Pokemon in the end. I don't know what I would've done without that specific Pokemon, though. Definitely not a battle to take lightly.

"Et lux in tenebris lucet."​
You must log in or register to reply here.
Top